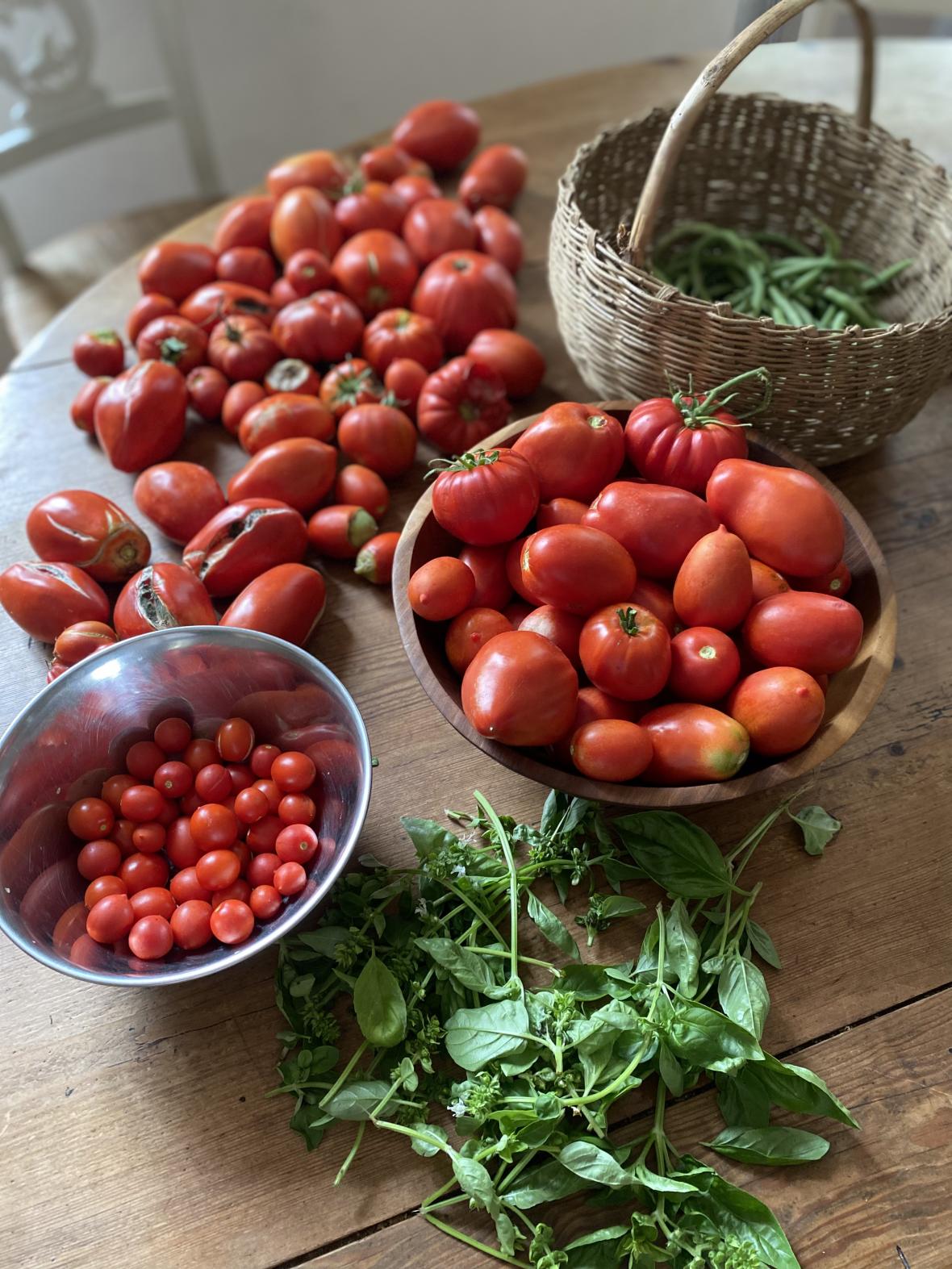 From the sublime to the ridiculous, last year gave us mildew and rain; this year is giving us drought and tomatoes. Tons of them. The picture above is just one picking of many. I have tired of making the italian tomato sauce which Jono always makes. Its absolutely delicious, but the larder is full of glass jars of the stuff.  I have also made bolognese with tomatoes for lazy and undemanding suppers. Most recipes I have looked up, use only one or two tomatoes. In desperation, I looked to my all time favourite cook book writer, Diana Henry.  She has a gorgeous recipe in her book: ‘Crazy Water, Pickled Lemons’.  Its for chilli Roast tomatoes on bulgar and spinach pilaf with Labneh. Its not something I can preserve in a glass jar though. Will try just doing the roasted tomatoes bit, and freeze them.   I have taken some tomatoes, removed the seeds, blanched briefly and peeled, and put those chopped bits into a tupperware for the freezer, as they will be divine for quick cooking.

Its been something thats on my mind a lot recently. The fact that we have such an abundance of lovely food in summer, and not all that many ways of preserving them for winter whilst keeping the taste and texture intact. Having had one summer that was too wet to grow many things, and another summer that was too dry, the reality of our dependance on being able to manage our food supplies becomes a reality. Everywhere you look, climate change is being discussed, and what it will be like. It seems to vary greatly, but how will food continue to be grown ? You won’t just be able to go into a supermarket and get what you want, when you want it. People will be growing as much as they can themselves, and then they will look to storing it. The best way that I can see, is preserving it in glass jars. Because you don’t know what your energy supplies will be like, and do you really want to rely on your freezer. I remember coming back from ten days away, and finding that the freezer had gone off the first day we were away, with all that was inside spoilt.  When I go to flea markets, people sell off the old glass jars that their parents and grandparents used. Its too much faff, and then they don’t have the time to do that gardening. Life’s pace has become frenetic.

So I have started preserving for the last few years. Jars of beef and potato stew, two years on, are really pretty good. Even cold. But I want to make a bigger variety, and more interesting food. I have some jars of chicken Faisenjahn. Thats a start. Recipes or ideas are welcome, for what I can cook and put in jars !   And… is anyone else starting to feel the same way ?