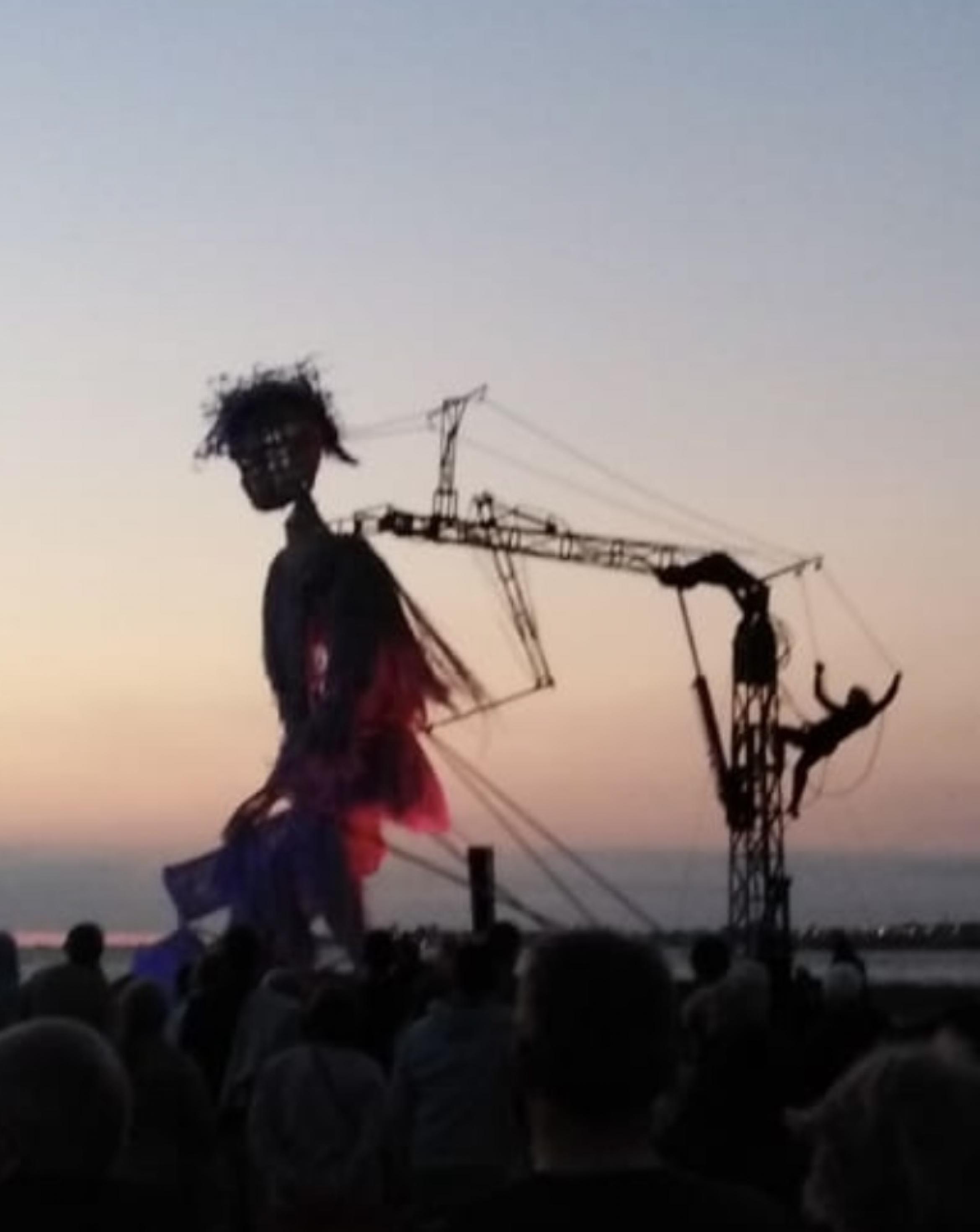 Last week, was the ‘Cigogne en Fete’, in Port des Barques.  Each year in this area, a different village is chosen, and for two days, it is lit up and decorated. People open up their garages and other spaces, and there are bands and theatrical shows that you can watch in walking by. The whole village is alive with music and colourful lights, light displays on the walls etc.  Jono, Monty and Ronan decided to go for the evening. I didn’t as was pooped and wanted a quiet night in.  Ronan is our young guest from Ireland by the way, who is following in Manu and Jesses path, by helping us out here, and exchanging life views.  Anyway the boys went off at about 22.15, as you want to get there when its dark because of the light displays.  They arrived to the car park, and there was a group of attendants who seemed to have been having a party all of their own already.  Monty was driving in his car which is an old station wagon. One of the attendants bounced over and promptly threw himself onto the bonnet, in order to guide them to an empty parking space. He sat there and gestured right and left and slid off when there. They were highly amused. Once wandering around the village, they saw various shows, from can-can dancers, to a balkan band who were brilliant by all accounts. There was a giant puppet which was being operated from behind by an acrobat in what seemed like upside down contortions. It was huge and was dancing to music. These puppets are made in Nantes in an art centre that apparently has made a huge elephant that children can ride on. The boys stayed out until after 1 in the morning, just wandering around and stopping off at music stands. They could not believe that three hours had gone by.

It is the flea market season, and this means getting up early at the weekends to get there early. Firstly for a parking space, and secondly to find the good stuff !  And this last weekend, it was our village of Champagne that has having a ‘brocante’, as well as the next village along, St.Agnant. Not only that, but it was the big monthly one in Rochefort.  I left early to get to Champagne, and saw that there was a ‘vide maison’ too, when they are clearing out a house. It was the house opposite the bakery, and I was surprised to find a whole bar when I went in. The lady said that it did used to be a bar/ cafe. But that was at least twenty years ago. I think if it were me, I would have taken the bar out.. it was a thing from the seventies. Fantastic formica.  I picked up an old mirror which will replace the one in the gite bathroom. I had always thought that one day I would replace it, when I found the right one. I then popped over to the school field where the brocante was being held. The mayor was there, and waved hello. We are so lucky to have such an active mayor, and indeed the whole team.  There was a stand where you could have your bikes marked up for free, presumably against theft. I didn’t ask, but headed for the first stand, where I saw a picture with an old photo of a child. It was rather faded, but would go perfectly with the collection of old photographs of children, dressed up for photographs, which I have in the south hall.  The same man had some really beautiful old tools. I bought some claw hammers for Jono for Christmas, but ended up giving them to him when I got home. The excitement of showing what you have bought.  I also got an odd tool that is for tractors, and will give it to Monty.  I found nothing much else in the market, except an old pitch fork for two euros.

And the good news is that we have finally had some rain ! Last night we woke to the sound of rain, and had to close the windows as it was coming in. And there was some more in the morning. 11 milimetres in total. Its not really enough, but a really good start. How wonderful.