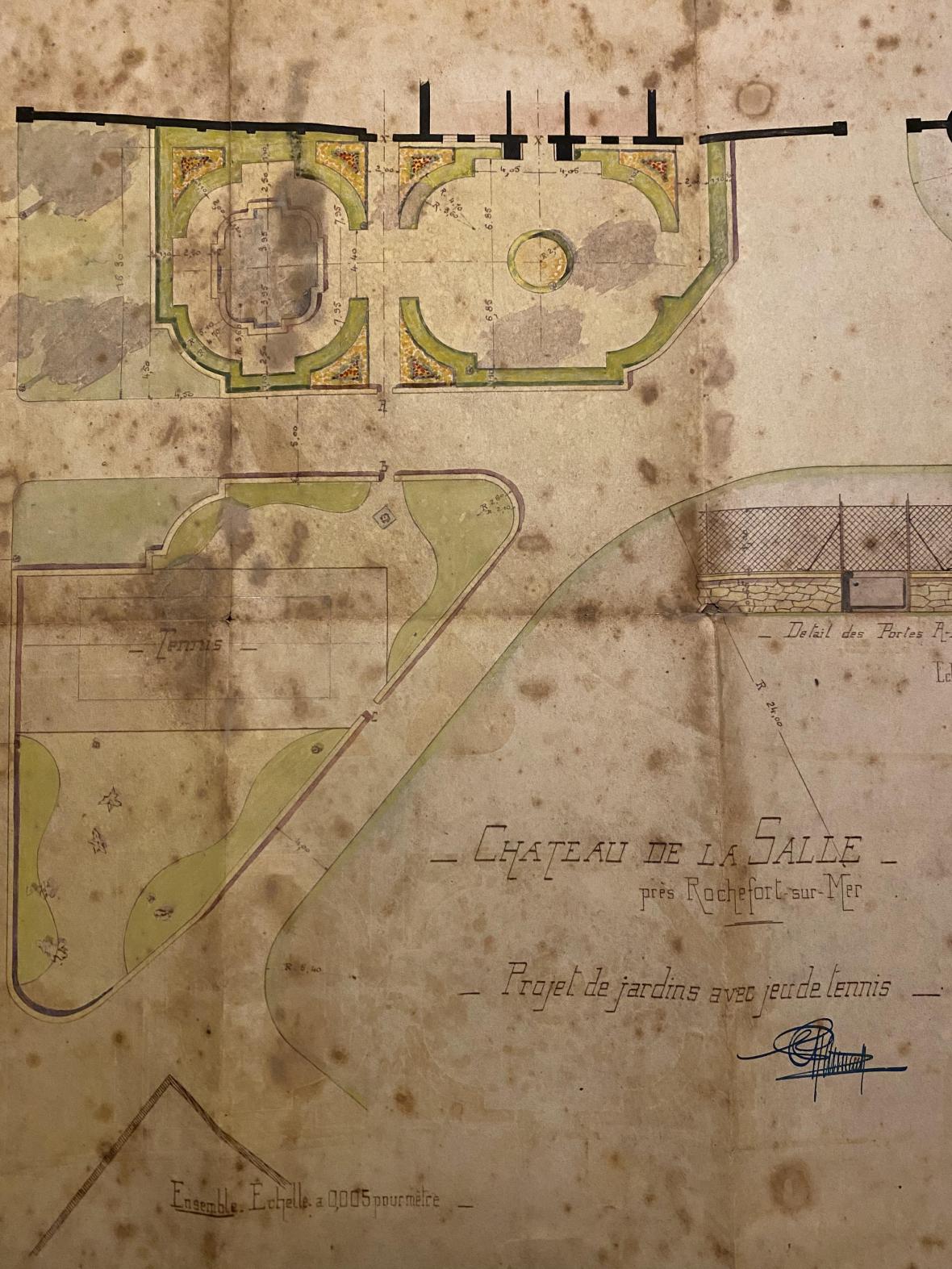 Yesterday I was upstairs in the sewing atelier, tidying up before this weekends sewing retreat, and over my music, I heard someone shouting up. I looked out and saw a gentleman in a panama hat, the latter side of 80. He asked if Jonathan was in.  I said not, but that I would come down. We played the cat and mouse game, where every time I would go to an entrance, I would see he was beetling off in the direction of the next door. Thats the problem with this place, because people often don’t know which entrance doors we actually use. Finally we caught up with each other, and he came in out of the heat. His wife appeared too and suddenly I remembered who it was ( terrible with names and memory.. ). Its Jean Chasseriaux, whose family owned this estate until 1939. He remembers spending time here as a child. His uncle sold it to the family whom we bought it from, but he says that his father had always felt so much regret, that he did not want to come anywhere near, or talk about it. And I think he carries the feeling of sorrow that his father had. He did however come to stay here during the last years of the war, because he had been invited, and there was food whereas in Rochefort there was not. We like him a lot. And he seems to be happy that we have bought it, He said he was absolutely delighted with the restauration we have done.  He stopped several times when we walked through the house, to say that he was so pleased that it had been properly done, with respect to the old features and materials, and kept simple and pure. ( A bit thanks to all those flea markets.. where you find the right door handles, hooks, pictures, curtains etc ). It was really lovely walking around with them, listening to his stories as he remembered them. ‘This is where my father hid his car during the war’, he said of the gite living room. ‘This is where we had the indoor toilets’ he said, and told us that it was actually a large plank with a large hole cut out for adults, and a smaller one for children, side by side.   He was pleased to see that the larder is still a larder, and that we have kept the old ‘ham stone’.  He explained that in the middle of that larder, he remembered the farmers daughters stirring the cows milk to make cream in a large round vessel.  This was then passed to the next room to be churned by other young ladies to make butter.  I secretly had put my phone onto ‘record’, so that I would not forget any of these stories. I must just remember to write them up when I have time.

At the end, we gave them a cup of tea, which they found amusing. The french don’t do ‘afternoon tea’, but they love it nonetheless.  Jean produced a ‘document’ which he had just found in his attic, and he wanted us to have it.  It is a plan that his family had made of the grounds, with a formal french garden at the front of the house, just as we have done. And a fountain and a tennis court, which we have not done. Its an idea though…. ( see the title picture )  He then said that he was going to bequeath us all the old photographs that he has of “La Salle’, as his children have no interest in them.  He has already lent them to us in the past, and we made copies and then returned them. I had had them blown up into larger sepia prints which are in the north hall staircase.  Isn’t that a lovely thing for him to do ?  He says that he would rather they stay with the house as he can see that we love the history of the house, and are keeping it all for posterity. An absolutely charming couple.  They will celebrate their 60th wedding anniversary in just over a year. I said that I thought they should celebrate it here.