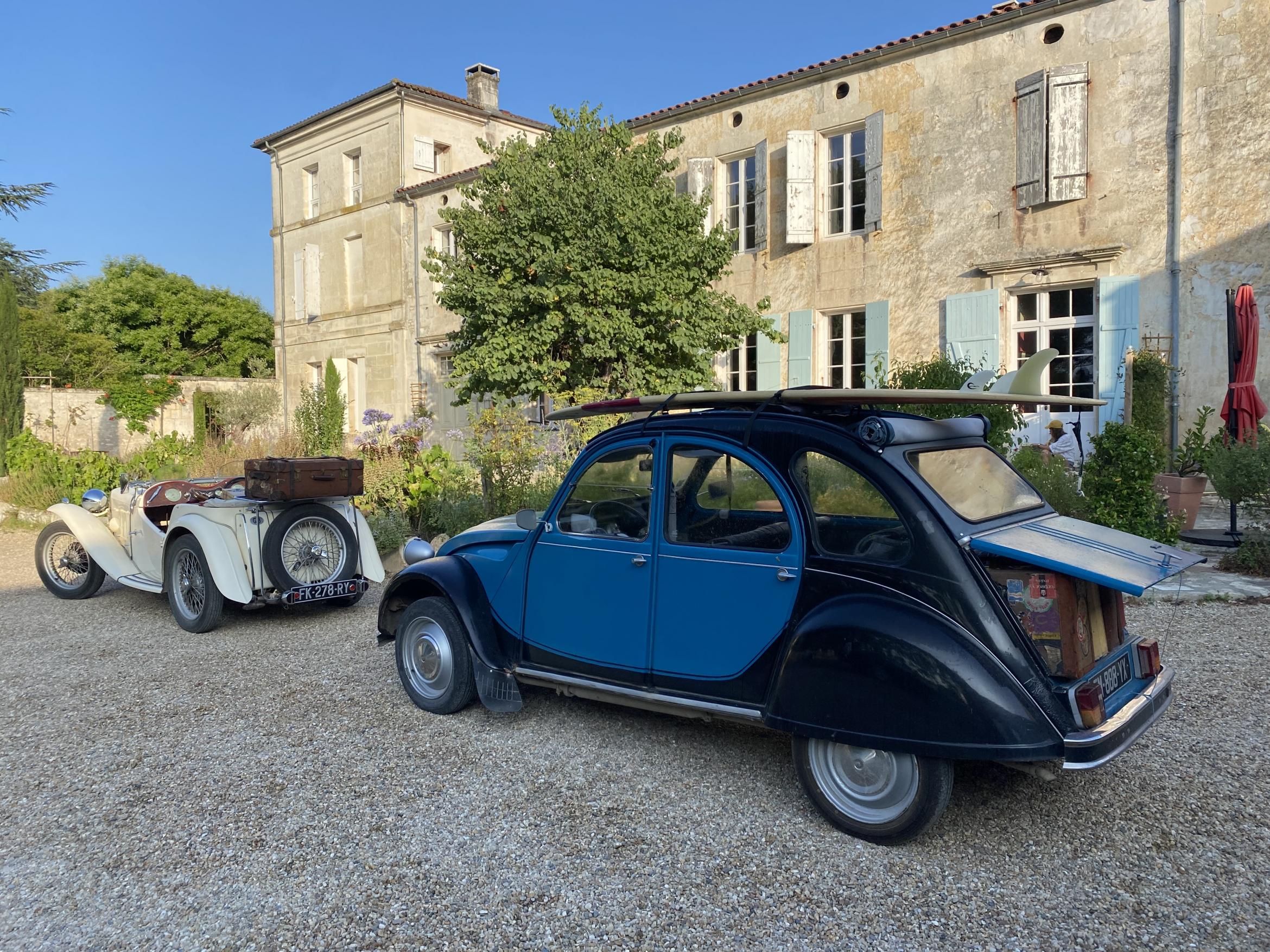 Its been the usual crazy summer business, and I can’t believe this was a week ago. Before the north to south motorway of the A10 was built, there were always known spots where there were huge traffic jams on the annual holiday drive down to the south. Le bouchon de Pons, translated as ‘the bottleneck at Pons’, was a well known one.  This little town was a ‘ville etape’, where people liked to stop and have lunch, shop, fill up and find stretch their legs.  When the motor way was built, it was suddenly peaceful and quiet.  However they do stage an annual traffic jam, with vintage cars, where people dress up in vintage costumes, to mimic the good old times. Jono had found the idea hilarious, and so we got our two vintage cars ready.  In the 1957 MG TC, were Jono and I, dressed as ‘les touristes Anglais’, and in the blue 2cv, were Monty and two charming friends, dressed as 1960’s surfers, with the appropriate board across the top of the car. Vintage luggage bursting out of the open boot. A quick trip to Emmaus was needed to find the right clothing. We set off early in the morning, to meet up with another vintage car enthusiast in his ‘singer’, and tootle along country lanes to Pons. On arrival, we were led to a holding area, where we then departed in groups, tooting and getting stuck in traffic jams along the way. People lined along the way, all dressed up and cheering and waving. It was all quite fun, and then we parked up next to the ‘dongeon’, and took our picnic out of the car to go and eat under shady trees. We admired how all the other families had brought nice little tables and chair, with table cloths, wine glasses, full meals, desserts and even ‘le petit cafe’ to finish up.  There was another little ‘tour’ of the area around Pons, but we decided to make a move home as it was quite hot, and we thought to meander slowly along country lanes. But oh joy, as usual when we go out with vintage cars, one of them wouldn’t start. Guess which one ?  Monty had ordered a new carburettor, but it had not quite been changed yet, so we had the boot of the blue 2 cv up, and lots of people coming to comment on how they used to have one, and they were ‘increvable’. Ie infallible. Not so here. We had to wait for a while for it to clear, so that we could start up again, but when that failed, Monty had the idea of getting onto the front bumper and bouncing up and down, thereby clearing the petrol clogging up the carburettor. It worked !  So we were on our way, and I only twice map- read us the wrong way.

It has been a lovely week, as we have had Monty’s friends from his biodynamic agricultural college in Switzerland here. We have met 6 of his friends now, and cannot believe what charming young people they are. As another guest who was staying with us too said :  ‘It gives you hope for the future’.  Indeed.  But they have now all departed, and it is quiet. Or not quite ! Manu has come back to visit us for a few days, and we are playing rummy-cub outside till the early hours. Lucky us, to be building up this big family of young people and to get to see them again. We don’t have many visitors left now for summer. All the boys are bemoaning the fact that we have three swedish girls coming to volunteer, but for August when they will have left. Ah well !

As for other news, well its all about no rain. Everything is so dry, and our well has run dry. The people around here are all angry with the farmer who is pumping out water on a massive scale, to water his corn. This, in the middle of the day, when evaporation would be highest. My consolation is that the run off is providing wildlife with water. But it is not doing much for the water table, and Jono and I feel anxious for the trees in the woods around us. Many are shedding part of their leaves to survive.  Our plans for this year, is to create water storage, when our rooves have been done. Which is another topic…. The shortage of materials means that our date keeps moving. From February to April, to June, to September. It seems the tiles are now being made in Spain by a french company, as their electricity cost much less than here in France. In the meantime, we are limiting our use of water in every way possible. Even our washing up water is now going out to the big tree when we are done. There are wood chips to stop evaporation, so it will act as a filter.

In the meantime, rain dances please.