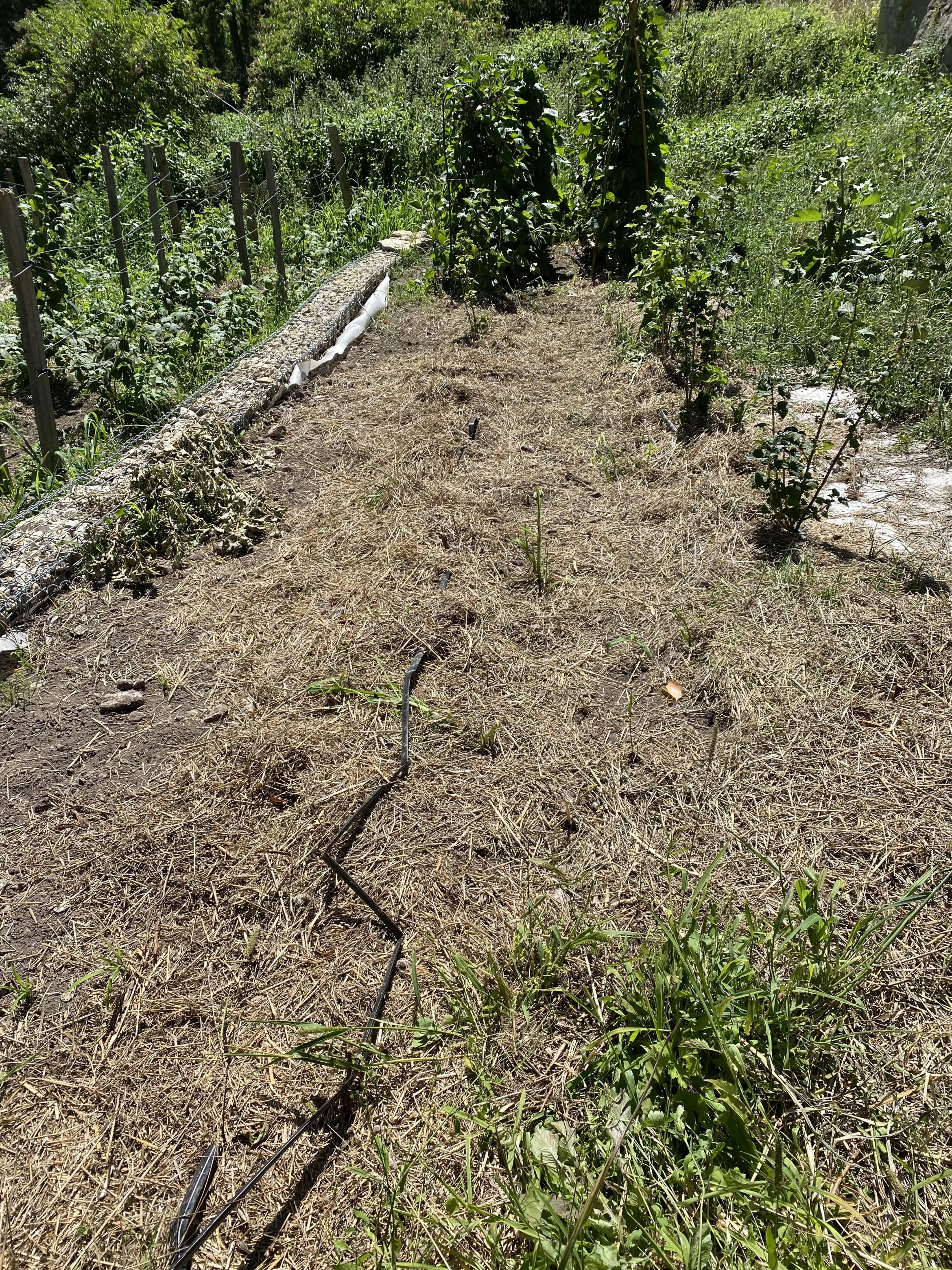 I will categorize this summer as : keeping things alive despite the heat. That includes my chickens and gite guests.  And the volunteer who was asked to weed between the two rows of black currant bushes, ( cassis in france ) but decided to lop off the actual blackcurrant bushes right at ground level. Don’t ask. Above is a picture of the ex rows of cassis plants. With the lucky survivors on the right.  On a plus note, today a friend told me that you can make a nice herbal infusion tea from dried cassis leaves. Perhaps I should go and salvage them.  And for those who really do feel worried, fear not. I have spoken to the organic nursery that supplied me with these, and they tell me that infact, they will reshoot from the bottom, and just to keep watered and covered with straw. Phew. And for those of you who were worried about the volunteer ( you know me too well )… Poor thing felt really bad but I made sure I did not speak with him when I saw the crime initually. Instead, kept my distance till my anger dissipated. After all, he did not actually realise he was committing a crime !

So onto other matters. Its hotting up again. I knew the perfect weather could not last. I find it funny that we left Dubai thinking that we would be in cooler climes, and yet we will be enjoying 40 degrees this weekend, albeit without airconditioning.I am so glad we had the extra insulation done on the house.  We have had some charming gite guests, and they have  two little girls there who have been ‘looking after’ the chickens. The chickens have been spoilt rotten, with water bowls and extra food bowls in every place imaginable. We have stitched some of them some aprons in a thick toile de Jouy, so that those who are a bit featherless after too much of the cockerels attention, have some protection. The girls asked me why, and in french I had to scrabble for a reason why the cockerel jumps on the hen. In English it would have been no problem.  We have also been collecting lavender to make lavender pouches, and they have embroidered their initials on them.  They have helped me sort out a huge pile of mixed up buttons too, and have excitedly walked off with a bag full of odd buttons for their own projects. Which included making full sets of clothing and necklaces for their various ‘doudou’s’.  Utterly charming.  It means my house is still an absolute mess as I had intended to clean and tidy it up this week, but as its a loosing battle, I have left it.

I was at Rochefort market again this morning - Saturday mornings being the main event. Apart from the various vegetables and sourdough breads, I picked up a bunch of gladioli, and stopped in to the lovely gift shop, Papagena. Anne and I had a coffee in the back room, and exchanged stories about our last couple of weeks. She says everyone complains about no sales since Christmas. We blame the media going on and on about the rising cost of living, and scaring everyone witless. Of course it really will be affecting many many people, and I hope things change for everyone, but it also seems to put a fear into those who really don’t have to worry.  I would be devastated if she moved her shop elsewhere.  I then picked up some peaches and cherries from my favourite fruit stand, and saw that he had just a few of those lovely large wonky lemons from Portugal, and asked him for some. I told him I loved his stand in February when he has it all full of lemons and mimosa, and he broke into a smile. He waxed lyrical about the lemons he had managed to get last week and how they had sold immediately. This man has always been particularly grumpy. It just shows I think, that we all appreciate knowing when our customers like what we do.

On my way to the car, I realized that I have STILL not picked up the painting that I bought in March, in the Artists open house day. The man never seems to be there when I am there, and I am terribly forgetful. I called him and he laughed, to be yet again not in town when I call. Next week, I will collect it, as he will leave it with the creperie down below.  Then I will put up a picture of it. You can laugh at my strange taste.

For this afternoon, I will see if I can find the little girls and take them to give little watermelon cubes to the chickens. I think they will like that.