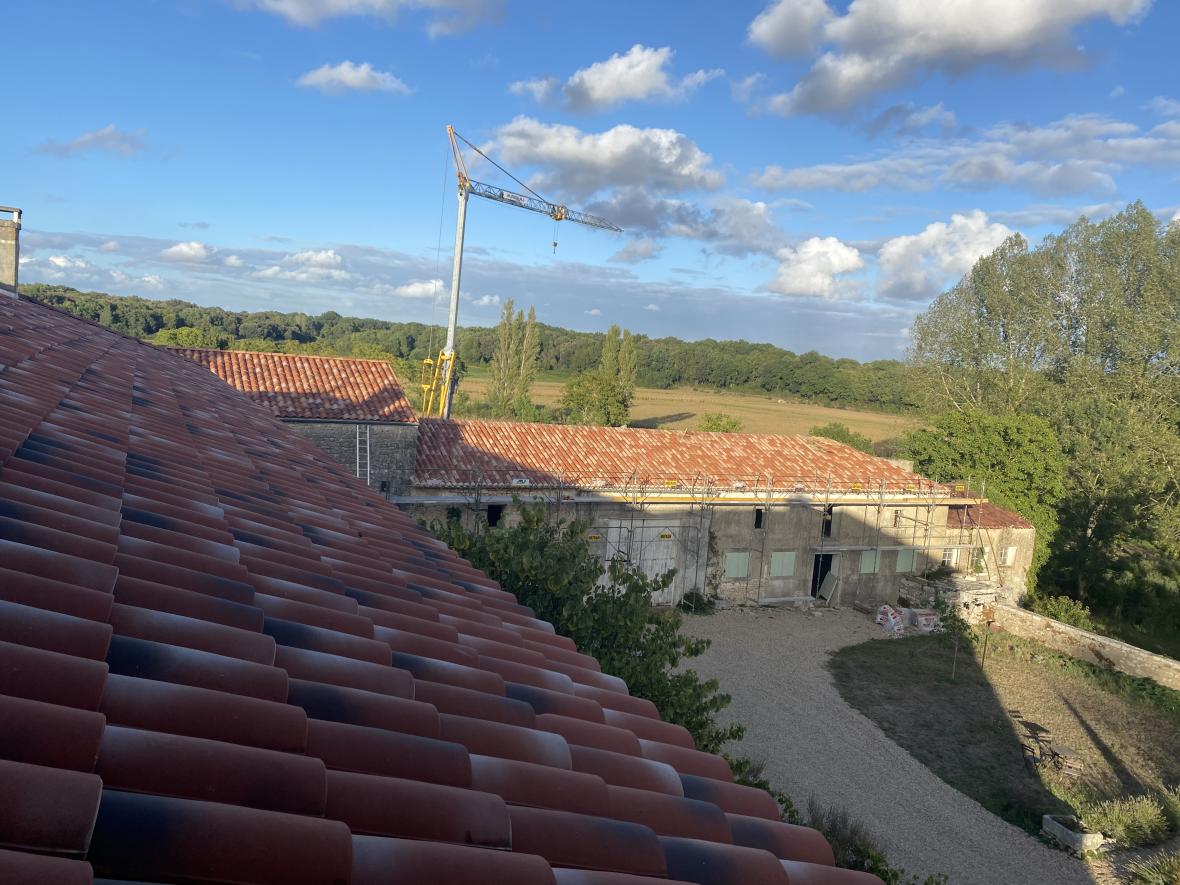 We have been sitting outside for lunch and dinner, as the weather is warm. Around 27 degrees in the early afternoon, according to our guage. Restless winds rustling the poplars leaves, and deceive us into thinking its raining. The skies have been mat and opaque, and when its not blowing, the silence is eerie.  Its just us two at the moment, and we have lunches of left overs, and old bits of cheese that were once plump and white, but are rather yellowed and hard now. A few remaining tomatoes that are small and often black bottomed, and a few green leaves. How different it is when we have guests. We love showing guests the delicious local specialities like the different cheeses, the spinach and chard pork pate called ‘ farcie charentais’, oysters of course, bulots ( like snails but from the sea ), the delicious sourdough bread, and I could go on. But its not that fact that these foods are different, but its in the quality and the care taken to make them. The butcher makes the farcie himself and it will be different from the butcher in the next town. The goat lady makes her own yoghurts, with pear coulis in the bottom and they are divine.  And the holy grail of sourdough bread I think, we have tasted here, from the nice ladies bakery in Pont L’Abbe d’Arnoult. Its heavy, a bit gummy, with that taste of earthy and fragrant something that I can’t describe. I prefer it most of all with just the salted charentais butter. I was listening to a radio interview where someone was talking about the care taken by the french, with their everyday simple cooking. Its true. For a start, I don’t see the same order of progress at a meal. And I don’t mean just the fact that they do cheese before dessert. Its also the fact that food might be served in many different courses. A green salad might be served on its own as a course in its own right. Which means infact, that you concentrate just on the taste of the salad, and the dressing. Its a bit like the slow movement much hyped in recent years;  Stop and reflect.   I was thinking about all of this, and the fact that a cookbook that I was given recently was not at all to my liking. Otto Lenghi’s Plenty, if you must know. Well its not that I don’t like his food. I really do. I love some of food in  the other book, Simple.  But this was so bitty, and finally I realised what it was. The dishes shown are just little dishes and I don’t know when to make them for. There is no ‘main course’  sort of thing, or starter. You might have a recipe for a beetroot, lime and breadcrumbs ( just making that one up ).  Well where am I meant to serve that beetroot lime and whatsit salad ? A starter ? A bit meagre… a side dish ? A bit cold and too calling out for attention.   Then it dawned to me that infact, I am a dinosaur. Its all about the new generation and their new habits. When I hear young people talk about food, they don’t think in whole meals. They think in how yummy a particular thing is. They eat in bits.  Like a smoothie. Or a particular salad. I am not sure how they string these bits together, but I think that social structure of meals together is changing. They might put a variety of things on the table that they happen to like, and nibble at them. Not a starter and then you have to wait, and then a heavier main course.   Maybe its a bit like their lives, fragmented through the internet and social media : little bits all the time, and focus on the pleasure or the impact. Modern food seems to be  large plates of all in one,  hot and comforting to eat in front of the ‘telly’ ( I think they do still do that to an extent ),  or these ‘yummy’ things which may or may not be eaten grouped together when at gatherings.  Even in restaurants, I often don’t know how to order any more when they have lists of odd and mismatched dishes.  Move over the old ways, in with the new. And I feel comforted to thing that this has been happening all throughout history, and that my idea of a structured meal is most probably not the same as a few hundred years ago. Its not so bad then, but just teach me please how to read those menus.

And so to figs. It is the season and I am determined to cook seasonally. We have some guests coming for dinner and I have gone to my favourite cookbook as usual, yes you know, its Diana Henry’s ‘Crazy water, Pickled Lemons’. I have decided to try out every recipe over the year because I constantly make the same. So we will have the lamb stuffed with fresh figs, walnuts and goats cheese, which I can only make at this time of the year if they are to be fresh figs, and then a desert of pannacotta with plums and figs baked with cardamom.   I have been unfaithful and taken a crostini with pear and goats cheese idea from Otto Lenghi for starters, as we have a few apero bits  already. That part of the meal will be more of a young persons thing, as I am blending ‘apero’s’, with starters and not the usual separate affair.  We will sit outside and enjoy the warm evenings that we still have and nibble on ‘yummy’ things.

And of course, the roof picture. Well it has progressed quite a bit. This is the part overlooking the south courtyard, and they are working on the rather larger back roof now. It had those asbestos roof panels on them, which have been removed, and we are to take them to a special site in a town near Rochefort. A day out then.  I think the whole thing might be finished by the end of the week. And after begging for a ‘devis’ ( price estimate), for the large hanger, we have finally got it, and are told that that cannot be done before March. I had so wanted it done as soon as possible as going into the hanger at the moment means hoping that none of the old tiles drops on your head from that great height.  I suppose the time will go by fairly quickly and we will have an incredible amount of rainwater to store then. Bit by bit, its all coming together.