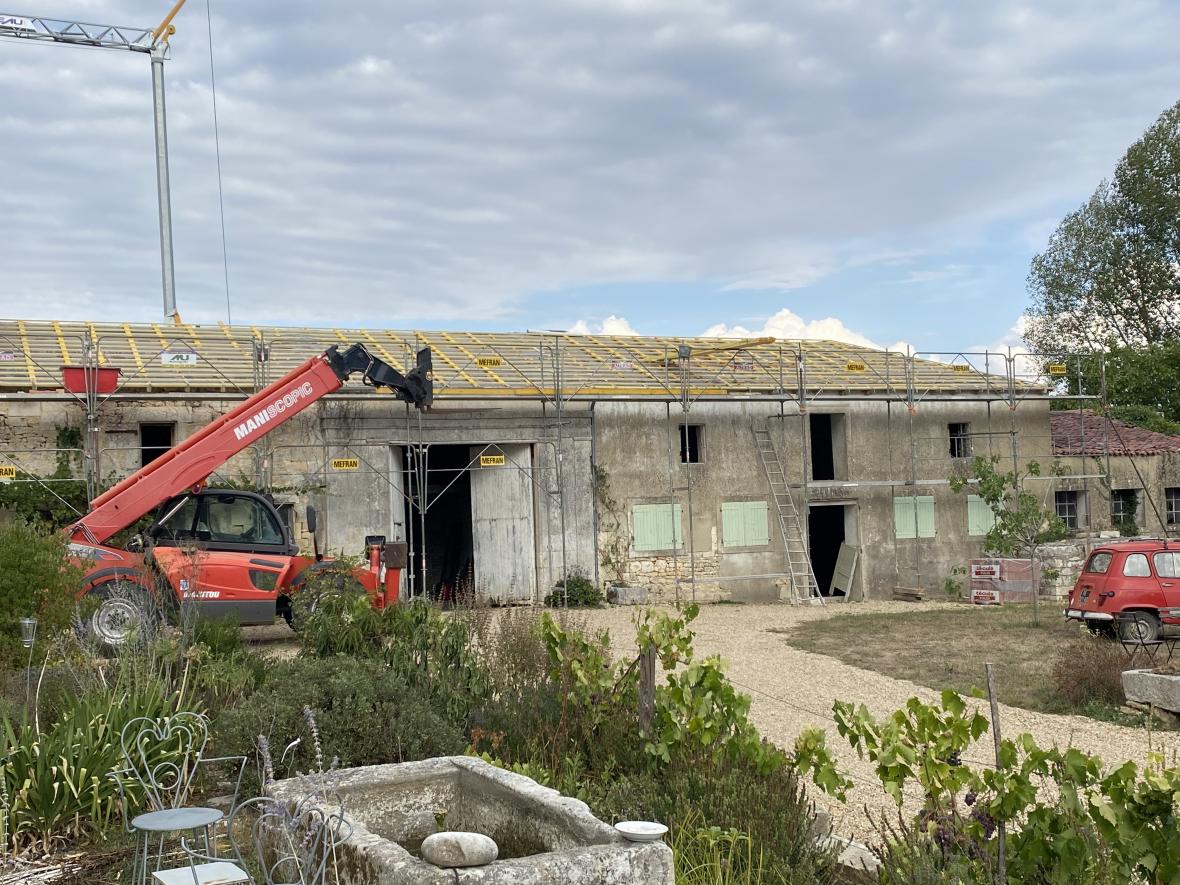 Finally the roofers have come to put a new roof over all of the old porcherie and the workshop. We have been waiting for two years ! The guys we are using are very good and they have a long waiting list, and then there was an issue of not being able to get the tiles. There are ‘tige de botte’ tiles, which are like the old ones, and then there are some sort of modern ones. We were standing in this spot, discussing with some new French neighbours who have just renovated another large country house, and they said that they hoped we would choose the proper ‘tige de botte’ tiles, otherwise it would just be awful. Of course, I said, racking my brains as to what it was we had chosen all that time ago. Of course this tile has been modernised since the last lot were put on. We think they are possible even from the time of the barn, so up to two hundred years old. Well they had to go as they had become porous and brittle, and every time it rained, we had to make sure that whatever vehicle it was in the workshop, was covered and not getting rain in the engine. Nothing else has been able to be done until this point. Not even the rain water saving, which we sorely needed this summer.   We have had an idea, which is to let the water come down a pipe where it then pours into the old water cooling stone that used to be part of the distillery. After that, it will go down through another pipe or whatever we can find thats attractive, to a large water reservoir down below in the corner of the potager. Jean Jacques who was our project manager, is on his last project with us. He said he definitely wanted to see this through, as its his favourite and best project of his career. Aww.

On other notes, we have just been up to Blois for two days. Well one day driving, one day there and another day driving it feels like. Still, it was nice to see somewhere different, and discover some new wines. It is a lovely little city, like most in France, but somehow you can see the economic pinch. So many shops shut, and my shoppers eye noticed that all the women’s fashion shops were cheap or close immitations to the bigger quality brands. None of the big brands at all. There were two nice interiors and gifty type of shops in one street but one was already going to close.  However there is an arts street, and they had beautiful handicraft shops. I was really excited about one that is all about hand made paper, and things made with it, like unusual lampshades, stationary and writing materials. I went there four times but everytime it was not open, until I saw a small sign inside that said it would be closed until mid september. Bah.  Further on they had a hat maker, which I thought rather unusual for France as I don’t see people wearing them…. Everyone dresses down compared to what you see at an English wedding for example.  Then a bespoke tailor, a printer and finally, an umbrella maker ! I kid you not. It was a smallish shop with all the old machines used in the various different stages of umbrella making, up to the purrer-onner of the little tips at the ends of the points of metal, so that you don’t scratch someones eyes out.  I did of course have to buy an umbrella, especially as they were actually made there in the shop. A bright yellow and black one, as that goes well with the colours of the local favourite rugby team.

I suppose that the biggest news should have been that WE HAVE HAD RAIN !!!  14 mms of rain. Hallelujah. Everything is starting to look a little bit green again. Its too late for the raspberries, blackberries and tomatoes, but no matter. It just feels different.  We are starting another hot week, but I know and can feel that we are on the home run towards winter. Never thought that I would feel that way.  This winter had an enormous list of things to do, starting with rainwater storage creation.  And apart from all the jobs, I definitely intend to go back to painting in that lovely studio that Jono has made me, finally write up the Peking to Rally notes from 1997, Work on the new project in the sewing room, and perhaps host a few more sewing weekends.