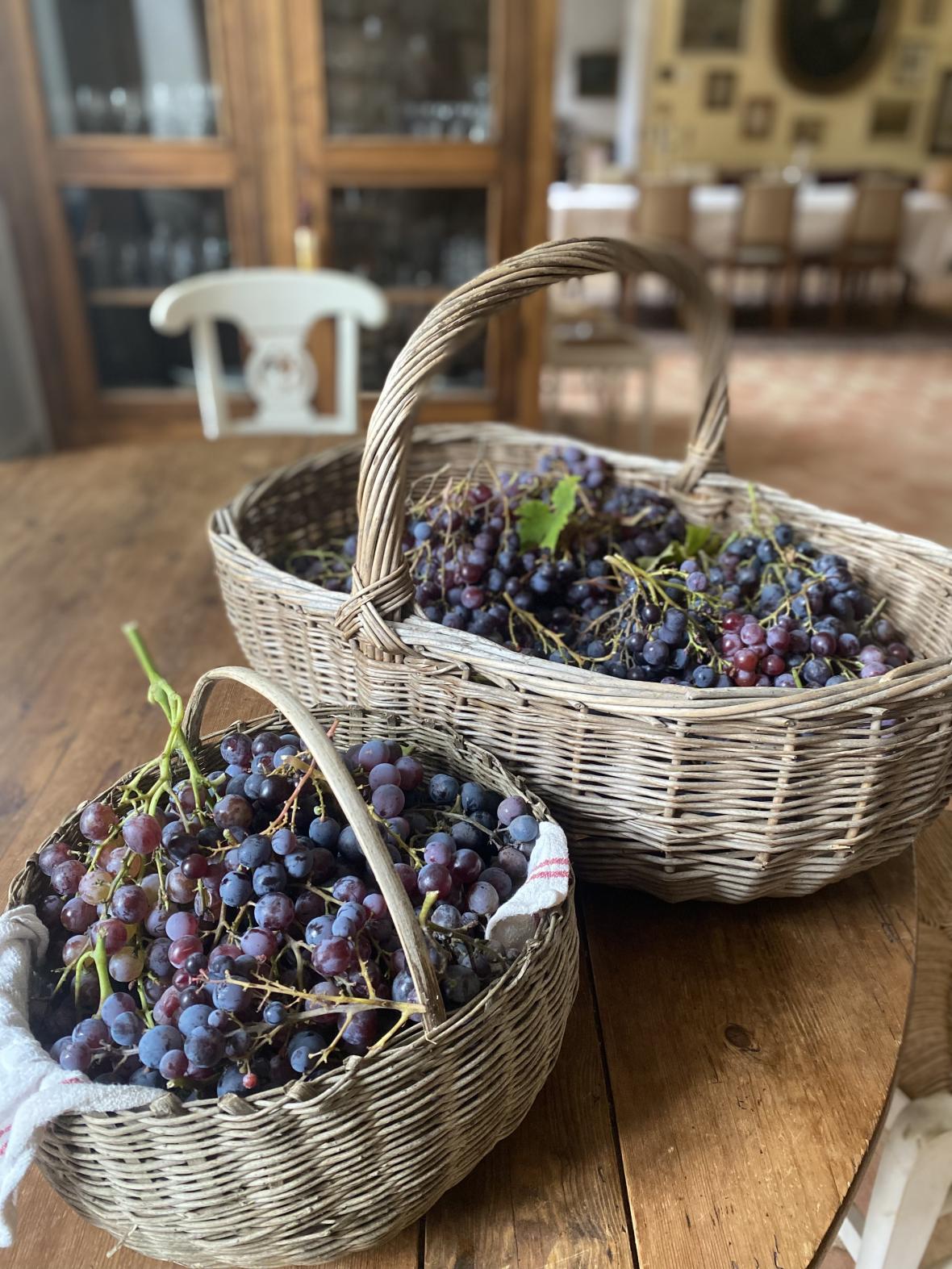 These are just a part of our grape harvest !  It has been an amazing year for grapes, even if otherwise, we have not done so well, due to the heat, drought and hot winds. We seem to have jumped from a heatwave into a cold autumn.  I have skipped a whole section of my wardrobe that is the bits in-between hot summer and cold autumn.  But we have had rain ! Its still a boon, when you were wishing for it all summer, despite the fact that we are meant  to be doing the winter drilling. The son who is away at agri college, has decreed that there will be meadow type stuff between the orchard trees, as he has realized that we are not capable of doing any better. Not after the disaster with Jono’s drilling the chickpeas.  Our total crop I think was at one big sack. As a neighbour pointed out, we will be eating hommos all winter. The oats are a rather harder task. They need to be sorted, and not only once, but several times. The contraption we have is an old ‘marot’, which requires a huge amount of turning. If you have read Tintin where they go off hunting for the treasure of Red Rackham, you will have seen the two Thompson detectives, pumping all day both on the ship, and afterwards on a farm. Well there were two of them and they were sweating profusely.  Jono says its bloody hard work. Its not nearly finished and we have little courage for it.

So onto life : There is new life everywhere in the garden and in the woods. After the drought, a bit of rain and there is fresh greenery  coming up everywhere.  Only don’t the plants know that winter is coming ?  I was wandering through the orchard to see which trees had died in the drought, and found pear trees in full bloom, as if in spring. I think it is not completely uncommon, but when you have around you, all the signs of climate change, this is disconcerting. Apart from the general heating up, its the crazy extremes that make it  difficult for those producing food.  We are doing what we can to plan for weather disasters. I think when you say this sort of thing, you get laughed at, and compared to those what are they called - survivalists ? These days, you have to fit into a very narrow field of being, else you are a conspiracy theorist, or a fascist.

And then, onto death. Last week in Rochefort, I saw a pile of flowers at a corner. I knew immediately that the sdf ( sans domicile fixe ) who was always there, must have died. It was a huge shock, because he was young and I didn’t think it was so easy to die just like that, but it seems he had cancer. He had had many offers of help, from the mairie and individuals but always refused them, preferring that street corner. People gave him food for himself and his dog. I only ever saw the beer cans and bottles.  Last month, I was chatting with a market vendor in La Rochelle who told me that there is a homeless person there who does all sorts of errands for the stall holders, and they had grouped together to rent him a flat, but he left it after a month, saying he did not like living like that. I felt so happy to hear about their initiative, and I see  that time and time again here. The community comes together for humanitarian causes.  Who knows what the mans reasons were for not liking a sheltered life.