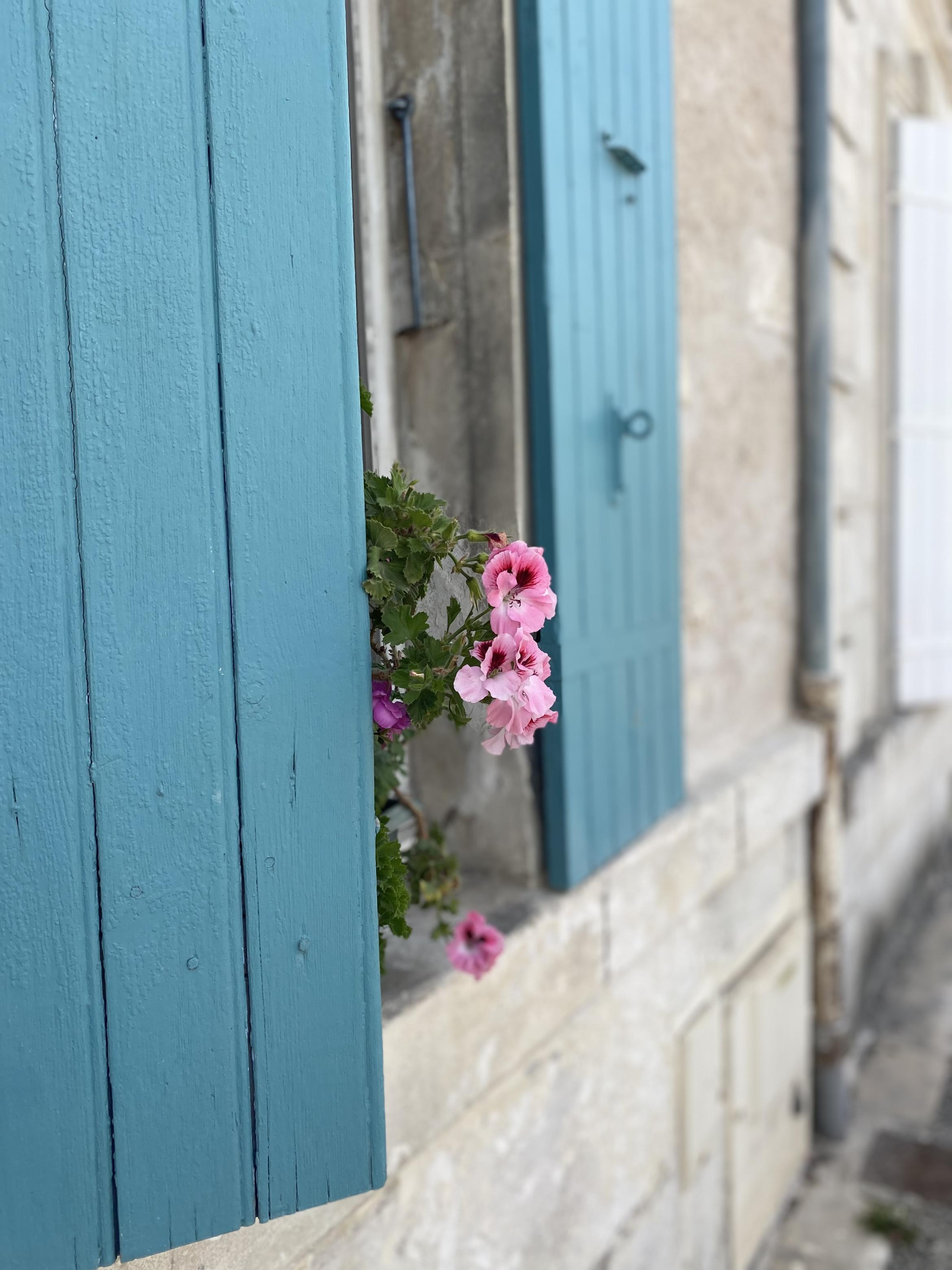 We have been upgraded to an ‘alert’ rouge. Red alert for I am not sure exactly what reason, but this ‘canicule’ that we are in, has been quite exhausting. The high today was to be 39 if I remember rightly, and tomorrow is to be 40 degrees. We are so grateful for having spent a big part of our renovation budget on insulating the inside of the house walls with 10cms of hemp fibre. When you walk into the house, it is as if we have airconditioning. The double glazing helps, but what helps enormously too, is the thick wooden shutters that old houses here have. Hence the photograph, which I took when I was melting down a street in Marennes. I was there for two things, one of which was to collect a housewarming gift for my niece’s first own property. There is a girl who makes the most beautiful pottery, and I went to collect from her house, a beautifully painted thing. Her name is Anais Trivier and you can see what she does on Instagram. Its lovely having so many talented artists on our doorstep. The other thing I was doing, was seeing a ‘notaire’, for the sale of a small piece of land that we don’t need, as its not near our property. It is for a lady who wants her horses to have the shade of the trees, and access to the little lake. She called me out of the blue and asked if we would consider selling. I asked if they were going to build a ‘lotissement’ or something, which is where a huge chunk of land is used for square uninsulated newbuilds, taking away the field or forest that was there. As she wasn’t, we were quite happy to part with something we don’t use. The notaires office was on Marennes square, and was an absolutely gorgeous old town house, with an entrance hall, followed by a wooden door with a Macintosh sort of pattern of glass squares. The floor had lovely old concrete patterned tiles, and there was a veiw to the back of a green area with a big chestnut tree. I hope it always stays that way. The receptionist was  hot, as her room backed onto the street, and she had a rather useless fan. The windows were not double glazed, but original. What do you do ? Keep the original I would think, but it does make it rather uncomfortable when its very hot or very cold, and you need more energy which we all need to reduce. History or future ?

We have been running around like mad because of the weather. Our orchard is divided into different sections, and we have put down an irrigation system all over it. But we have had to put it in lines, with branch lines running off it, and these have taps on them. You can’t water all of the orchard fields in one go, or even just one side, as the pressure of the water would never be enough. So each time we decide to water a different section, we have to wander up and down, turning on some taps and off others. We do this in the dark, as we water at night, and it means wandering through the thick wildernesses on the edge of the orchard, with torches, gribbling around on the ground to find the section of pipe with the tap. The new neighbours in the mill house must wonder what we do there at night.  Not to mention my trying to get the chickens to bed. So almost each night it is another section that needs to be watered. This is because our trees are mostly under two years old, and need watering until their roots are deep enough to find moisture deep down in the soil. If not, they would die, and we would loose another year, and the money spent, and feel sore about the huge physical effort.  Then there is the  watering of the vines at different sections of the property, hedges that are still young, and the soft fruits and tomatoes in the potager. And then there is the hops in the north courtyard, along with the new young ever green trees that look close to death. Its excruciating ! Oh and my pretty garden in the south courtyard which looks very un-pretty at the moment, but there are more important things to water.

We have been learning and experimenting with the different types of pheromone traps. Because of the zillion and one insects that want to sap the life out of the apples, pears, plums, cherries, prunes, apricots etc. Each fruit seems to have its own host of bugs. Coddling moths are the ones that give the apples those browny tunnels inside with a worm. Lovely. So I bought a variety of traps to see which one was the best. I can tell you that the little pop up plasticky cardboard like ones are all rubbish. They are too light, and so fly around too much in the wind, loosing their little pheromone containers, and getting stuck all over the place. What a waste of money and resources. I just found some heavier plastic pot like ones that I have great hopes for.

I cannot believe we are running around doing all this sort of thing, when all I am really good at is fabrics, drawing and sewing. What happened ?  Whose hare-brained idea was all of this ?  But I love living here, amongst nature, falling asleep with frogs croaking and crickets stridulating all night long. Hearing all the different birds, and seeing the many types of bees and insects, and slowly learning to distinguish them. I love seeing the seasons bring us something new, and the fact that we no longer have to get onto a plane and return to a life that was not ours. And I love the feeling that we are doing something that is making a difference, even if it is tiny. That has to be worth it.