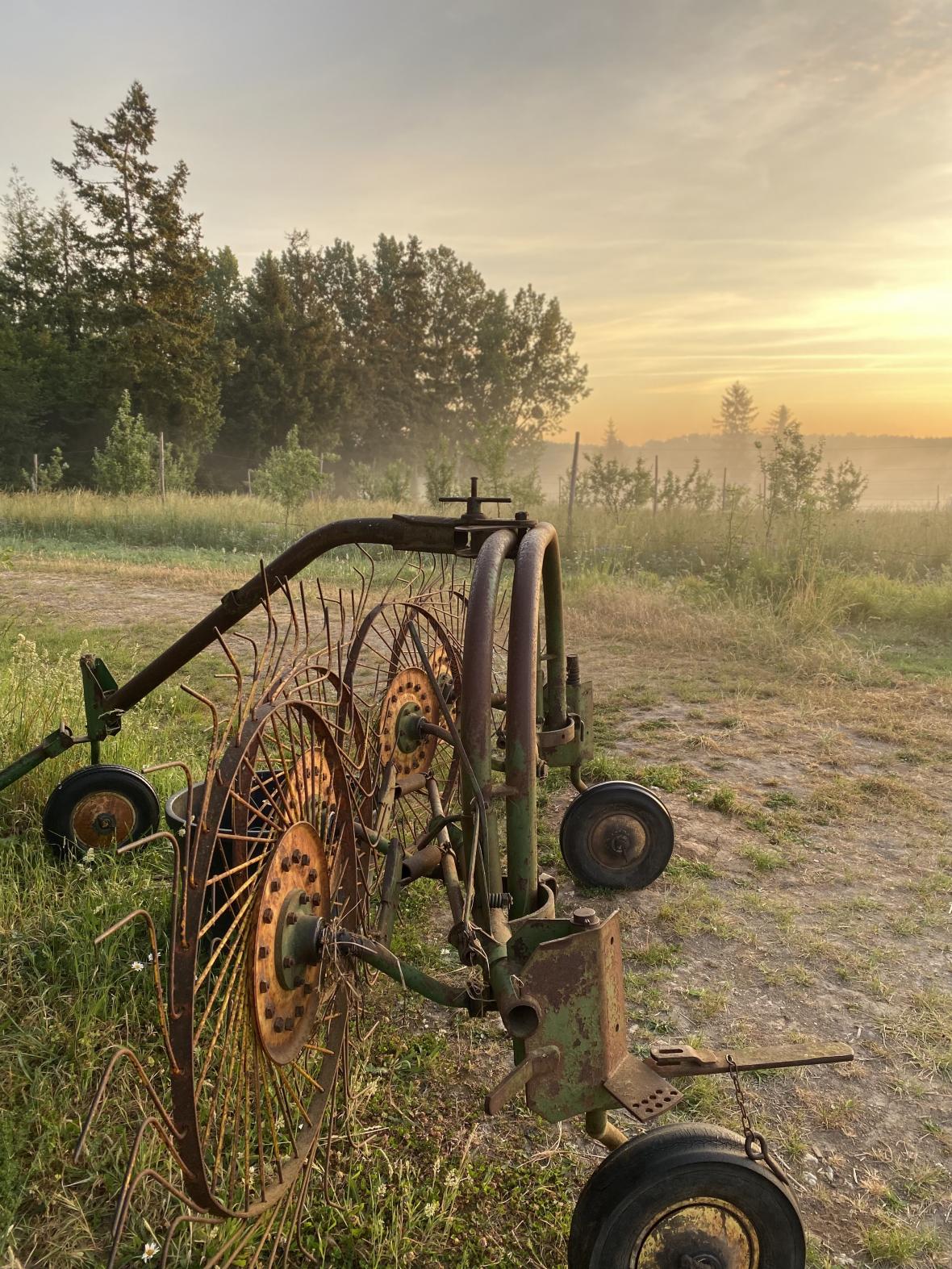 Last week when it was so hot during the day time, I realised that I had been sleeping on the job, and I needed to urgently do the apple thinning in the orchard. This consists of finding the bunches of tiny apples, and knocking them off to leave only one for each grouping. And to make sure that a small branch has not more than two apples. Otherwise, they never mature to being a proper sized apple, due to the energy going up the small branch being shared by too many apples. And as it was so hot, I got up really early in order to have the cool of the morning to work in.  It was quite misty one morning as I went into the orchard, and I thought this odd agricultural implement of Monty’s looked rather romantic. Hence the photograph.

We are rather happy because three of the four wilding bee hives that we put up last year from ‘custom apios’, have now got bees in them.  The one in the orchard does, which is the best, because the bees are then pollinators for the fruit trees. And also in future, we will be able to take a tiny part of their honey.  The fourth one, did not get a swarm.  And we think we know why. Jono went to have a closer look, and discovered that a large spider had taken up residence, and had woven a web over the entrance. The little bugger.   So it was removed and persuaded to go elsewhere, and we hope that maybe there might still be some bees looking for a home. Although in all reality, it will probably only be next spring. And now that three are inhabited, it makes me want to see if we can put some more. For a large healthy bee population, which was one of our main  goals when we got here. The wild flowers that we planted again this year, were unfortunately rather ruined by the three weeks of hot dry weather, after a winter of hardly any rain. They came up, and just frazled to a cinder. I hope there are other seeds that could still come up. We look at the rain forecast every day.  Luckily the flower garden I have planted in the south courtyard is giving its best. There are lots of sages, salvias, wallflowers, hyssop and many others that the bees and insects are loving.  Last night we were sitting in the barbecue corner, and I could see up the allee, with the evening sun on the golden grasses. Above them in the sky, were thousands of insects, all buzzing about. Hurray ! I am someone who is always being bitten by any insect that comes by. I even got a nip from a ladybird nymph, but I know we need insects, and I feel happy that we are doing our small part in keeping them alive. Not cutting the green spaces, letting grasses and flowers grow wild, no pesticides or other chemicals. Leaving messy corners here and there.

After we were told that the farmer who used to work the land before us, used to smash swallows nests with a broom stick, I presume so they didn’t poo on his tractor, we were really incredulous. We had just one couple in our first year, and I am sure they have been increasing in number. I will have to have a proper look but I think we have three couples this year. I can’t help but thinking about the long journey they have to get here. (And then some plonker smashes their houses - no wonder they didn’t want to come back. ) Anyway they are most welcome now, and we are going to make sure that they can always access the areas that they have their nests in .  We were sitting having lunch two weeks ago, and one came and sat on a small metal pole sticking a small way out of the wall. It preened itself for a good while, sat and seemed to be perfectly happy, and then finally headed off.  I wish they would eat a bit more. We also have a healthy population of mosquitos.  We don’t have nearly enough bats either, as I only ever see one flying through the sky in the evenings. They didn’t like our shutters being renovated, and I put up a bat box for them, but they have pooh poo’d it. I think they are in little cracks in the barn roof and walls from the inside. But we will be re-doing the roof as its leaking now, and so will put up several bat boxes in other positions, as an alternative for them. Not that they don’t have lots of niches in any case.

And finally, the golden oriole that has been calling out…. I fear for it. Or them.  The neighbouring landowner is having his crop of poplars cut down. And apparently they like nesting in poplars. We do have quite a few poplars too, and I do think by how near it always sounds, that its probably nested in ours. Which we decided against cutting down and re-growing. That was before we even knew about these birds.

The longer we live here, the more we seem to learn. For example, I didn’t know that if you have ‘coulevre snakes’, ( grass snakes ),  then you don’t have vipers. And I am mightily glad of our healthy population of coulevres. I love ‘happening’ upon them, down in the potager. I wouldn’t feel the same way about a viper.  The other thing I often happen upon down there, is a very large green lizard. About as long as my arm and hand together. Its just beautiful. I put a wooden box down there, as a sort of raised bed box thingy.  And I put it on large stones, knowing that that would give it a habitat, as it was living under a plastic table top last year. Anyway I was delighted to see that it appears to have taken up residence just where I have offered it a home.

All of us at La Salle, said no to the village marie, when they offered us street lights. It perturbs the insects at night. I have grown used to the dark at night. I wouldn’t go wandering up the ‘Allee’ alone in the dark, but in the company of others, it is a very pleasant thing to do. I am already looking forward to the glow worm season.

Everyone can have wild patches in their gardens, not use chemicals, accept a few leaves nibbled here and there, and not mind about bird droppings when its not really important. I imagine that if every garden did, and those who don’t mind, leave little gaps under their fences for hedgehogs and other small creatures, then there could be whole wildlife corridors.