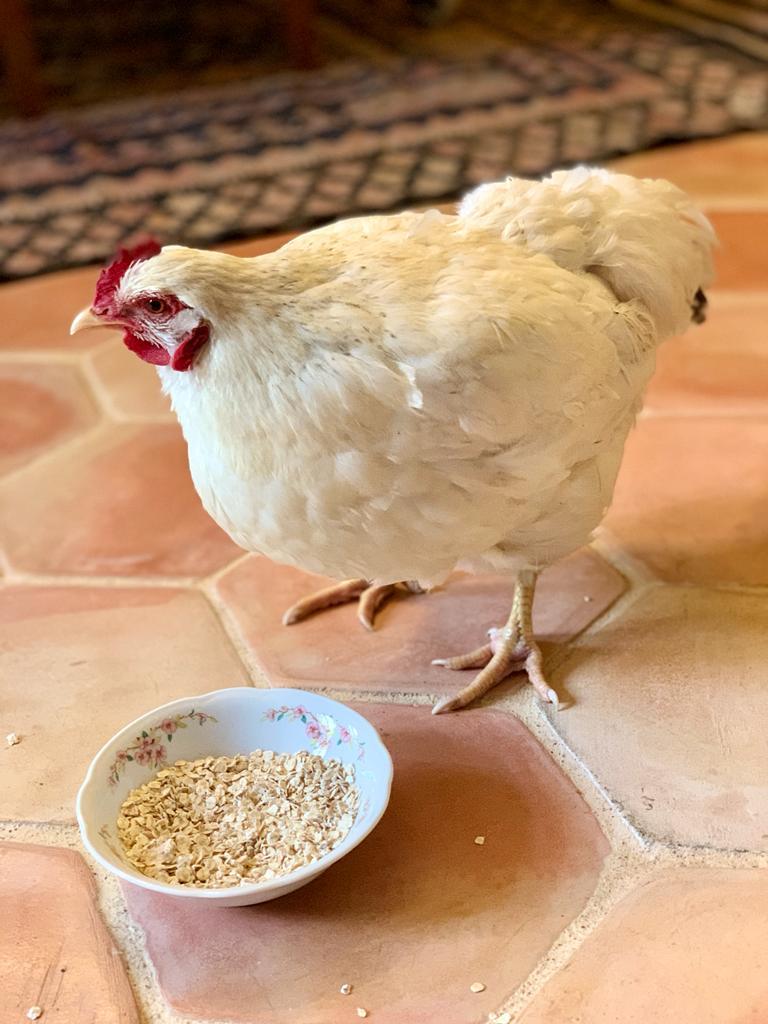 This is Dora. She was a very unusual chick, because of her ferocious courage. She was spotted chasing and devouring a whole mouse, when she was only a very small chick. Our gite visitors witnessed the event and told us incase she had problems..  She didn’t. But she didn’t grow much either. All the other chicks grew up to be adult hens, but she only grew to be a feathered chick. Not that anyone gave her any stick for it. Her courage and daring continued. If there was a hen that caught a large insect, or was in the scrum of the food fights, it was always her. One day, we noticed that she was growing. She grew to be as large as the other hens. Only shorter. Which is how we always recognised her, as there are three others just like her.  In February, the mill house down the lane was sold to a new family. I heard on the grapevine that she was being nicknamed ‘Dora, l’exploratrice’ by the new neighbours.  Eventually when we met the new neighbours properly, and had a little ‘apero’ together, we discovered that she was the only hen that came on her  own, all the way down the lane, to peck about their garden. Its quite a way for a hen on her own, hence their nickname for her.

On our property, there is a rather horrible concrete tank which fills up with water in winter. We are going to have the whole thing blown up ( there is a very high section too, and its cracked and so useless ). We have to keep draining it to stop mosquitos growing there. Between it and the ‘potager’, I have had to put up a fence, so that the chickens don’t go into the ‘potager’ and rip up my freshly planted tomato seedlings, when they scratch around. But someone had left the fence down, and so two days ago I had to chase a group of naughty hens back into their area  As I did so, and put the fence back into place, I looked into the horrible tank, and to my horror, saw a floating hen, dead. It must have flown up to get over the fence somehow, and thought the tank water was solid, as it is full of green algae.  It was ghastly, and I had to call Jono to come and dig a hole while I found a long implement to drag it out and into the hole.  Poor thing must have been there a while.  I looked for the outside tap so I could again empty the tank, but it would not budge. I would wait just until the weekend for Monty to be back and help me, as he knew how to do it.  Today, Jono again had to chase chickens out, and I asked him to make sure none had fallen in the tank. And yes, one had.  He came in with it, but it was still alive, or so he thought, because its head had been above water. I rushed to get a couple of our old towels, and wrapped it up. I changed towels, while Jono got the hairdryer. I then spent the next hour blowing it with the hairdryer to warm it, and then just with it in my lap. Its eyes were closed, it seemed dead. Then it twitched once. I kept at it, warming it up until it changed from looking like a chicken on a supermarket shelf, to a fluffy white one again. I was sure it was dead, at many stages.  Eventually it started shaking and shaking. Hairdryer, rubbing, repeat.  Eventually I just sat with it on my lap, and Jono noticed it open its eye. Just the one, mind. Anyway cut a long story shorter, it eventually appeared to breathe, and started sleeping. I had to go out, so left it sleeping, swaddled in the towel. And when came back half an hour later, it was stood on the chair, looking around. This picture is after we put it on the ground to see if it could walk. Well it could, as it escaped across the dining room floor and left us two ‘souvenirs’ on the tiles. Then it found the bowl with oats, and pecked madly. Yes, Dora is still a good eater. She is now back with all the other chickens in their palace.