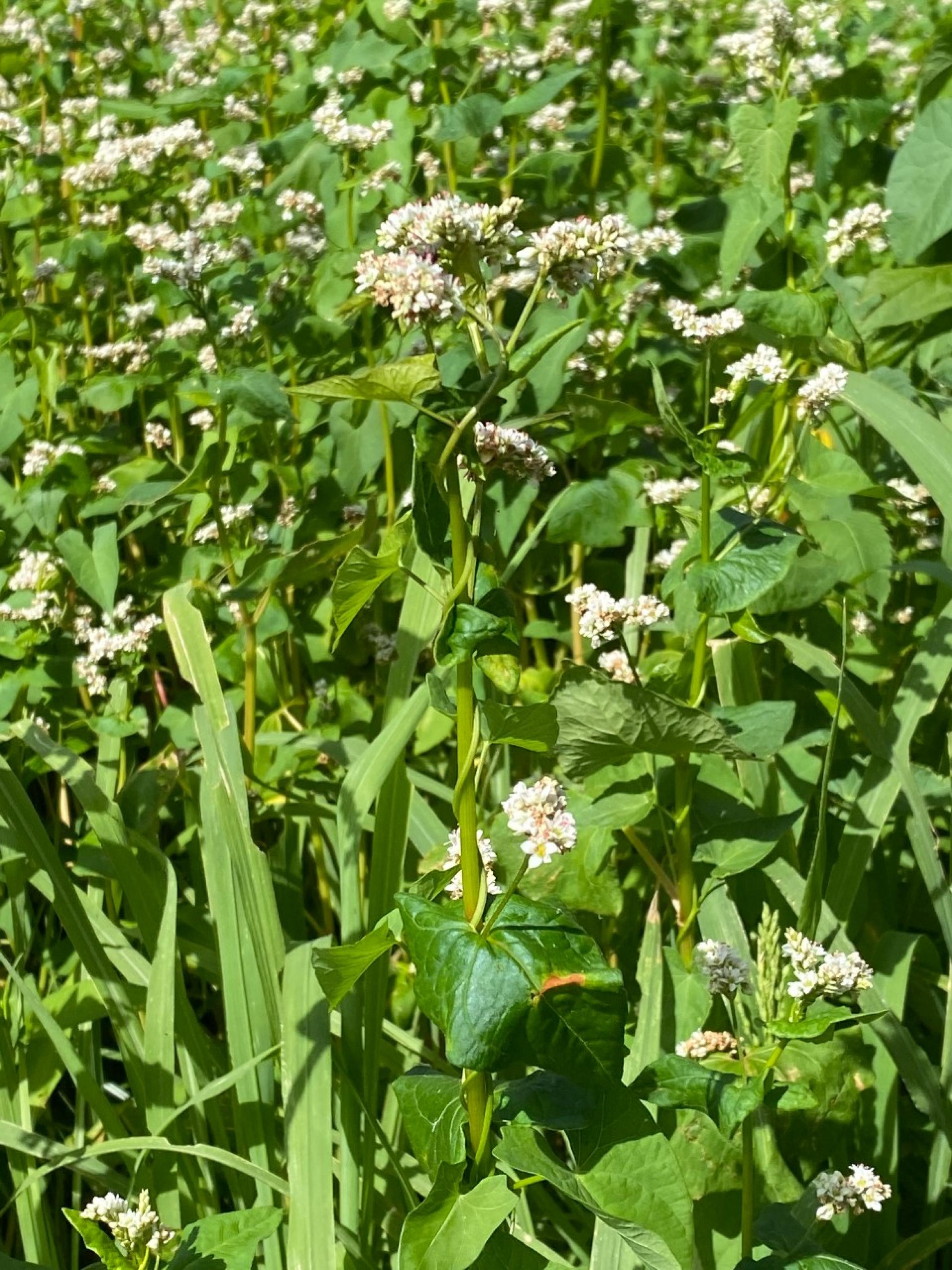 I had not seen buckwheat flowers before, but Monty has drilled a dual crop of buckwheat and millet in the big bottom field. And now the buckwheat is all in flower. Its not spectacular, like the sunflowers that are in bloom in some fields at the moment, but its still rather lovely to come down the hill and over the bridge to realize that a whole field is fully in flower. When I was at the Rochefort market last thursday, I spoke with the baker who makes organic sourdough bread, and also gluten free bread which is really good. He is interested in the crop. But he also said that he has a friend who is studying bees that forage on buckwheat flowers, and she has been looking for fields of organic buckwheat to put an experimental bee hive. Unfortunately she is not around at the moment, but I would have loved to learn some more.

Monty is working out how to make different wire mesh sections for the combine harvester, to manage the different sizes of grains. In the top fields he has planted oats and chickpeas, and at the moment, we are dismantling a mesh panel that I had used for my hens temporary chick cage, as it seems to be the perfect size. Adapting things is what most farmers I see here do. Thats the other thing Monty has been doing, and has roped in his visiting friend; adapting a dynadrive ( don’t ask.. ) into a dynadrive with a spreader all in one. A lot of banging and drilling and sourcing new bearings, dropping bits on the ground and finding them again. It appears that the thing is finished. As far as I understand, you pull this behind the tractor and the dynadrive which is a rotary cultivator, reduces the earth clods to smaller crumbly soil, with the spreading being used to seed cover crops.  So its now done in one action instead of having to pass through the field twice, which would have used more petrol and compacting the soil unnecessarily.  He has just a couple of weeks left to work here, before he starts the two more intense years of the biodynamic college, and so he is trying to get as much done before leaving. And so for two years, there will not be so much going on in terms of farming. He is sowing a meadow between the trees in the orchards.

I have not worked on the hare that I was half way through sewing, because I was picking up another friend from Angouleme yesterday. Quite a beautiful drive with wide reaching views over the open valley of vineyards around Cognac, and spectacular clouds after the heavy rains and storms we have had. And then this morning I was enticed to a new brocante that I have not been to before in Rochefort. It was rather sweet as it was mainly private people clearing grandma’s attic, rather than some of the more professional sellers. I found a couple of stands with old linens, and picked up some beautiful hand-embroidered linens and trims to be used in the hare making weekend. I now need to soak them in bicarbonate of soda overnight, and then wash them in soda percarbonate, to get rid of the old yellowing and age marks.   I then bumped into someone whom I had first met during the artists open houses in Rochefort in March, and she and I discussed doing a workshop together. She is a fabric dyer and I had bought a gorgeous cushion cover that she had created. I don’t feel very confident with the dying of fabrics unless its just for me. So all those vintage shifts that I have been collecting over the last year can be used for dying and adapting to sew super original summer clothes. We will do some experimenting together before offering this workshop, but I am really happy that that idea may actually happen.

After last weekends heat wave, this weekend produced rain all of Saturday. At least 11mm. We were really grateful.