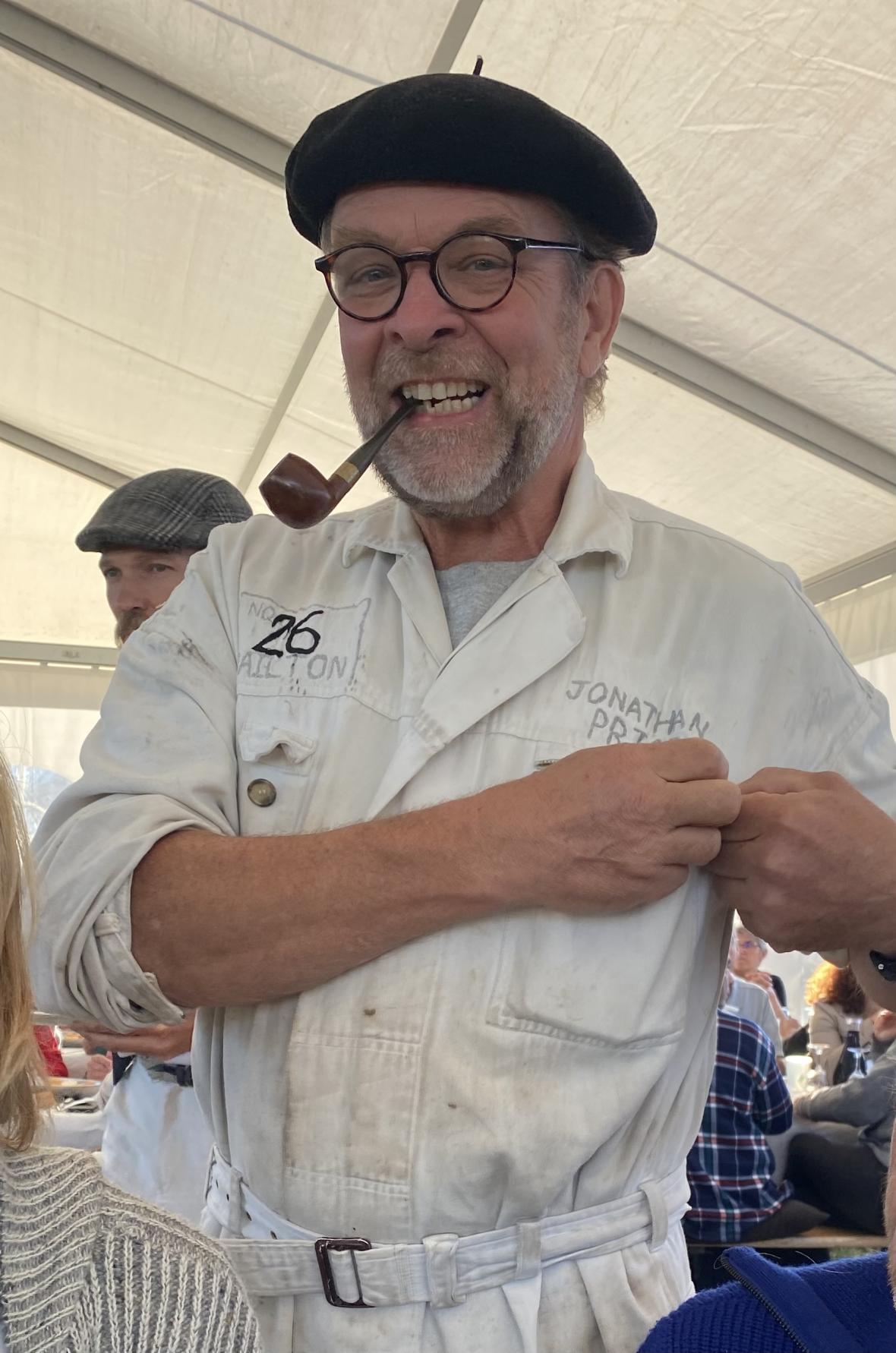 Last week we gathered some of the neighbours and all went down to Montierneuf, to watch a ‘spectacle’ - which I can only translate as a show. Montierneuf is a tiny place just a couple of kms down the road, where an old norman  abbey has been saved from complete collapse, although only the vaulted undercroft remains. It was even used as a defence. One doesn’t normally see this as its private, so its another new thing to discover. Anyway…. We went to watch Jono, whose big job was to drive our little farmall cub across the stage. This all started rather bizzarely, last August when I found an old wine press to buy. It was about twenty minutes away, and when I got there, I found that a man was literally clearing the house of his late father. And his father was by all accounts, someone who did not get rid of things. I chatted to the man, and he said that he had an old trailer for sale too, which I went to look at, and another little smaller one too. Old wooden trailers which were in good condition, although deeply ensconced in an overgrown barn. I had to return with Jono, Manu and Jesse, and a tractor to pull the trailer out. The man had another friend there, and they found out that we have a farmall cub. ( A small old tractor ) So of course, we got roped into lending it for their show which they put together once every three years. The ‘Gallipots’ is what they are called, and the man described it as an all singing dancing show like ‘Le Puy du Fou’, only not the same at all.  Local humour.  Then they asked what other vehicles we had, and yes, they did indeed want to borrow the MG TC 1947. As a display vehicle along with some others.

So thats how it happened that on thursday night, we all trapsed off to have a ‘banquet’ dinner there, and watch the show. Jono had to be the tractor driver, so he was nervously rehearsing his tractor route. He was to pull a married couple across the stage at the beginning and something else. When we arrived, there was a whole display of vintage army tents, vehicles and all that goes between. There was even a washing line with some old long johns and army kit. Then we were told to hurry to the banqueting tent, as they were almost finished serving ‘aperos’. Can’t miss the apero in france, so we hurried in. The banquet was an open marquee with lots of tables and a large and very merry crowd. We sat down to our pineau and little fish biscuits. ( You know, the type where you have fish, elephant, heart, spades, diamond and a little turtle in a salty biscuit packet ). This was followed by a terrine starter with a Farci Charentais  which is a local pate made with pork and greens like kale etc. Of course finely ground, so it looks like a pate,  only its dark green. Followed by a chicken leg with mash and a lot of creamy sauce. I say this because we were highly amused by the group of people serving. It consisted of perhaps four adults, two teenagers and eight under 10 year olds. They were charging about with these large plates of food without once spilling any of the sauce or dropping bits of chicken leg. Amusingly, two of the girls were quite obviously going to be something bossy when they were big, as they had a head start.

The show started at 10.30 pm. I kid you not.  They wanted to wait for it to be dark. There was a very funny beginning where two short fattish monks came running on with a boat ( bottomless, carried with their hands and bow-legs poking out beneath. On the side was written ‘Hermoine’.  A word play on the boat in Rochefort called the ‘Hermione’, which is faithfully buit after an 18th century frigate in the 1990’s. Her - moine ( moine meaning monk ). And so it went on. Out of a lit window in the abbey, an old charentais made jokes in the local dialect. I think I understood only one joke. The play was very animated, and in the middle there were horses that charged onto stage and did something that I can only say looked like synchronized swimming, only done by horses, and on land.  It started raining and we all huddled up, and then it stopped. And then it started. Behind me, there was animated chatter, and a pat on the back. Apparently I had a large spider on my back, and the lady whose knees were closest, was arachnaphobic. I dusted off my blanket. Then there were clowns, fire eaters, fire jugglers, and then there was the star of the show we had been waiting for :  The englishman dressed up in a beret, driving the tractor across the stage.  His second appearance was the best, as his little black beret was turned white, due the canon dust blowing out, under which he was sitting.   We left well after midnight,

That is an exerpt from village amateur dramatics, done the french way. They don’t do things by halves !